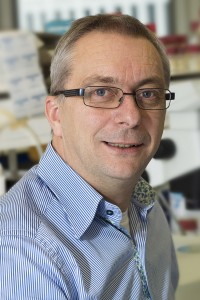 Wim Vermeulen received his PhD in Genetics in 1995 from the Erasmus University where he studied the genetic heterogeneity of mammalian nucleotide excision repair (NER) and biochemical properties of some key NER factors.

In 1998 he started his own group, with which he pioneered novel procedures to quantitatively monitor dynamics of DNA repair and transcription in living mammalian cells. In 2003 he received a VIDI grant from the Dutch Science Organization (NWO) to further exploit the tools developed to quantitatively determine in vivo DNA repair. In 2004 he became associate professor at the Department of Genetics (now ‘Molecular Genetics’) at the Erasmus MC. In 2013 he was awarded with an ERC Advanced grant and as of September 2014 he is appointed as Professor in ‘Genome Stability’ at the Erasmus MC.

• understand the pathogenesis and clinical ramifications of inherited NER defects

• investigate the pivotal of role of genome stability in cancer